The salted in trays

The dynamic brine system using trays consists of a series of polyethylene trays (apt for its food use), which pile up on others up to a 12 trays forming auto maintained tower. Each tray has capacity for 15 cheeses of 26 cm. of diameter by 21 cm. of high.

Each one of the trays allows that the cheeses are floating within her and they stay submerged as well within the saline solution, to have of ceiling the bottom of the tray that they have above.

The cheeses that are deposited in the tray support on a plastic plate micro perforated and soon, on such, it is placed of a very fine plastic mesh so that they are not marked when they float, to be in contact with the bottom of the tray that is placed to above. 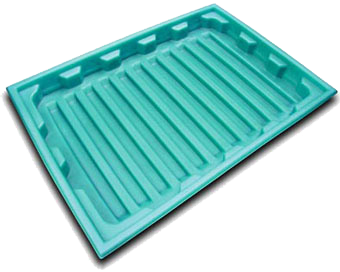 As are located the cheeses within the tray are filled up the same one with brine, originating of the cold brine deposit, impelled by means of a pump or by unevenness, if the installation allows it.

After completed the tower of trays and to the time that opens the superior faucet that will feed on brine this tower, is due to make level horizontally, by means of a manual system of regulation, which they have the legs of the stainless steel that maintains them.

On the tower of trays a superior a cover it is located that distributes the brine towards the first tray with cheeses, when filling this one first tray, begins to overflow itself by the grooves arranged on one of the lateral ones towards the following inferior tray. So that the draining takes place from a sense towards the other, it is worth to say it enters by the right and it leaves and so on by the left by each inferior subsequent tray. This operation is repeated until filling all the trays of the battery.

We can say that the brine crosses all the trays from a side to the other, making a species of coil or zigzag. For under the tower of trays a tray is placed of drainage that has an orifice it permits evacuate the brine in a pipe or central chute that is beginning to gather the brine of the towers and sent it towards a saturator of salt to keep the saline constant concentration.

All the tower rests on a structure of stainless steel of four adjustable paws, to give you to the tower the appropriate level.

After replacing the salt to the solution, this one can be filtered and be cooled before going towards the central depot from where the cycle will repeat again.

When the period of salty finalizes for that variety of cheese, the faucet of brine feeding is closed and it hopes to that the trays empty by small orifices that the same ones have. It is possible to be let slip cheeses within the trays, or otherwise to pass them to shelves of oreo, depending on the necessity to reuse the sinks that are had.

It is important to emphasize that these towes of trays can be manipulated with a freight elevator or a hydraulic car to take them to different places from the plant. The trays can be washed below any condition that possesses the plant, so much manual systems as for detergent foam, hypochlorite, temperature and others. It is advisable that after each use make hygienic to him because can be fixed somewhat of fatty matter exuded of the cheeses during the process of salted. In circumstances of great need of space of brine, with a simple rinsing with watering heats remain prompt for a following use, by taking into account that the brine in recirculation is to be filtered and disinfected in form constant. 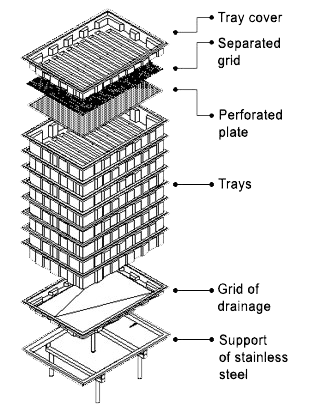 Advantages of the system

It is important to emphasize that the salty one is made of evener way and had mainly to that the crust of the cheese always is in contact with the saturated brine the process of salty makes in smaller time. This data is extremely important at the time of evaluating the brine requirement. A test for each type of cheese is due to make, then, as it is described above, is a series of factors that influence the speed of salty of each variety of cheeses. It is considered in general who can be reduced in a 15% to a 20% time of salty, but evidently this data must leave analysis of the content of salt of made cheeses to laboratory level. 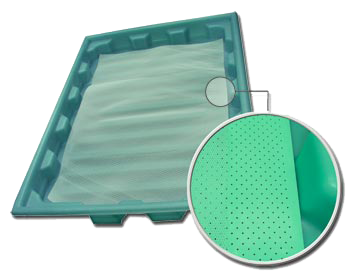 The system allows a reduction of the manual labor for the salty of cheeses, since the task is avoided daily of turning around cheeses within the conventional sinks, as well that reduce to the tasks of transport and cheese movement within the plant, because in case single they are constituted like a container for the cheese transport.

This system allows to make a maintenance of the brine of permanent way, since constantly the salt taken by cheeses is recovering and a task of constant cleaning is made. Evidently this aspect is extremely important at the time of evaluating the risks that a balance of bad quality implies and with contaminated brines.

Because the brine is recirculating, the cooled one of the solution can be made in a heat exchanger to plates, doing more efficient the use of thermal energy and guaranteeing that the saline solution always is to the ideal temperature to make the salty.

Evidently, in summary the aspects mentioned previously and observing them from the economic point of view, this system of salty allows a considerable saving due to a smaller necessity of physical space, reduction of manual labor, saving of energy and reduction of faults by errors of handling of the process of salty. 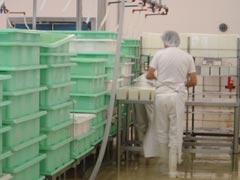